Christmas is coming fast…just four days away. Is your shopping done? Your party plans made? Do you know what Church service or Mass you’re going to? Are you going to get to see and do all that you want to?

In today’s blog, I thought I’d address what Christmas is and isn’t. Let’s do the latter first.

Christmas isn’t just this commercial thing, where we’re hustling and bustling to buy things. It’s not just parties and celebrations, decorations, food, and drink. It’s not just light shows and concerts, nor caroling or drinking of eggnog.

And it’s not an opportunity to just use a different greeting, given the time of year, like Happy Holidays…

Instead, it’s where we can wish others a heartfelt Merry Christmas, knowing that Jesus and His love are at the center of it all. While Christmas can be those things above…as long as they’re wrapped in love, it is so much more.

More than anything, God is love. And the greatest love He could give us is His Son. As opposed to making a grand entrance, Jesus entered this world the same as we did. Unlike us, He was born of a Virgin, our Mother Mary, the first Disciple.

For His first 30 years, Jesus lived the life that we do. Different from his public ministry, He garnered little attention, instead being with His family, learning a trade, learning His faith, and working along-side His father….all I would suspect so He could minister more effectively to those He would meet, in addition to you and me.

Jesus entered into our humanity so that we could enter into His divinity. We celebrate on Christmas one of the truest examples of love in all of human history (the other being Jesus’ Crucifixion)…

Christmas is the time of year when love is truly in the air. There seems to be a compassion and generosity that don’t exist at other times of the year. People seem to be happier, friendlier. It is a time of joy, excitement, enthusiasm, and as we approach the new year, even expectation.

Although holidays, including Christmas, can be hard for some (we just lost my father this past October), December 25th, Christmas Day offers us hope in what can be this sometimes gloomy world. Christmas reminds me of John 3:16, where Jesus says that “God so loved the world, that He gave us His only begotten Son, so that all who believe in Him may not perish, but may have eternal life”. That’s the gift of Christmas.

God loves you more than you’ll ever know, no matter what you’ve ever done. More than anything, He wants you to live a life of Peace, Joy, and Fulfillment.

May you and your family have a very Merry Christmas and a Happy New Year!!!

If you’re like me, when you think of courage, the images that come to mind include soldiers going into battle, a police officer rescuing a hostage, firemen pulling people from a burning building, or someone saving a victim from an attacker. These examples and similar ones are what get all of the press coverage. In those stories, whether identifying with the victim or the “hero”, we get a glimpse of “courage”. 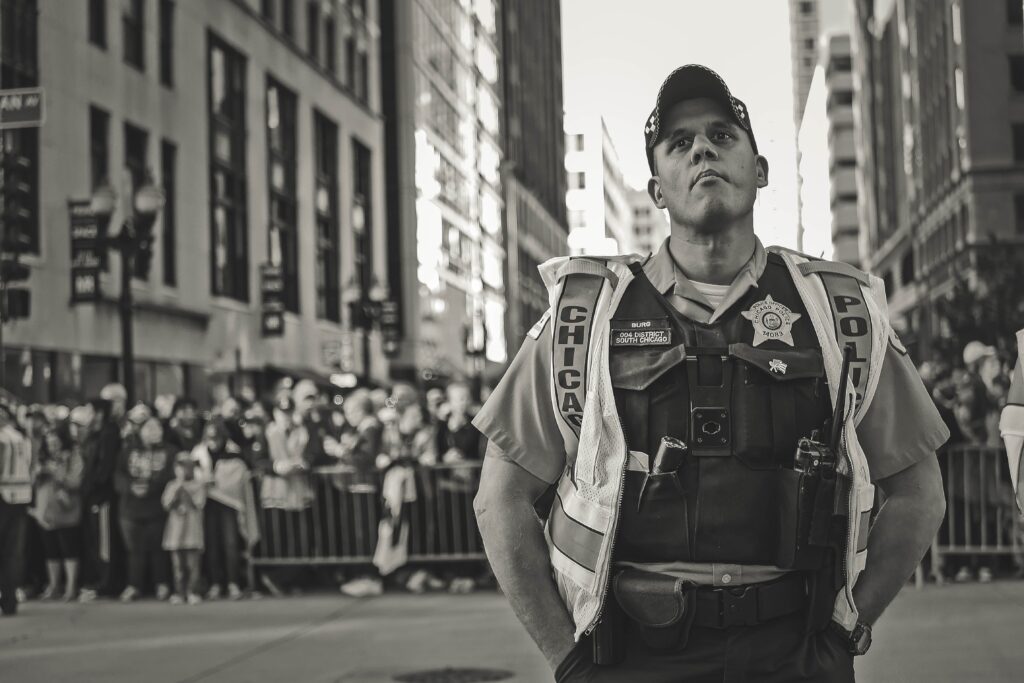 Examples of Courage in Everyday Life

The truth is that we have examples of courage all around us, that are far less dramatic than the above. The story I want to share here is very close to home, relating to my wife’s father, who not only showed great courage, but dignity.

When I met Rodney, my father-in-law, then in his 70s, he was still cutting hair in his barber shop of 50+ years, managed his rental properties, golfed and bowled regularly, hunted, raised cows, took care of his 15-acre country property, and spent tons of time with his best friend (my mother-in-law), his daughter (my wife), and the broader family. Rodney was a friend’s friend. Everyone knew him and everyone loved him.

Having experienced tragedy previously in his life, including being thrown from a speeding car as a teenager, breaking his back, and being the lone survivor, Rodney was diagnosed with ALS, more commonly known as Lou Gehrig’s Disease. For those not familiar, ALS, or amyotrophic lateral sclerosis, is a progressive neurodegenerative disease that affects nerve cells in the brain and the spinal cord. Early symptoms of ALS include:

As the disease advances and nerve cells are destroyed, the muscles progressively weaken. This eventually affects overall mobility, chewing, swallowing, speaking, and breathing. With no cure, life expectancy is typically no more than 5 years after diagnosis. 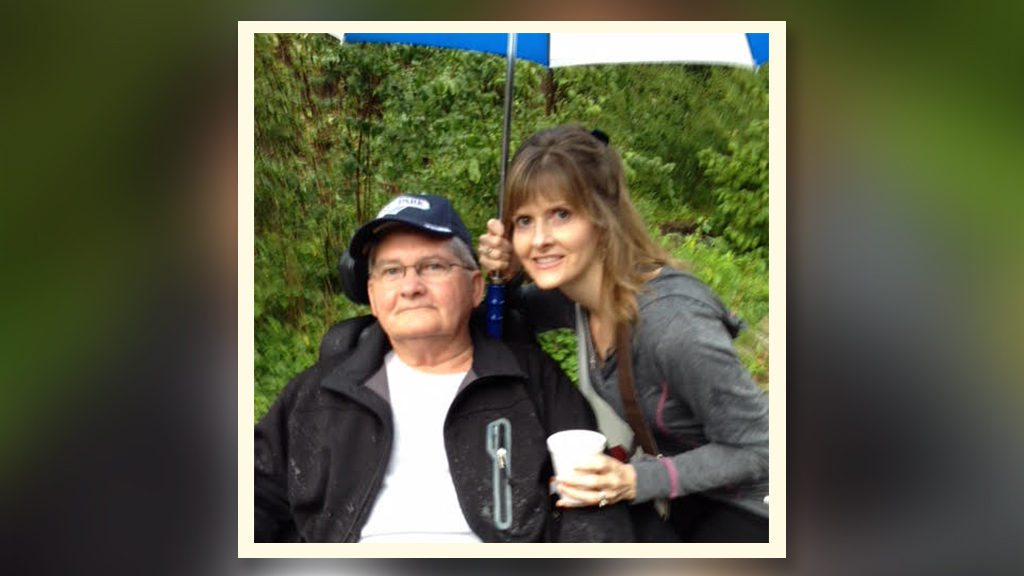 So as to prolong his retirement, he used rubber bands to help him hold the clippers in his hand while cutting hair. He eventually had to stop working, which was preceded by no longer hunting, golfing, or bowling. He went from a cane to a walker, followed by a scooter and then a powered wheelchair. Over time, he couldn’t do anything for himself. He went from living a healthy, active, vibrant life to realizing that he was dying a slow death.

From the very beginning of this chapter in his life, Rodney never complained. Never. Not only did he never complain, but he took on every new endeavor (and there were many) without hesitation. From giving up work and all his hobbies, to no longer driving, to being in a wheelchair, and ultimately having his every need taken care of, he did it all with what I view as absolute courage.

According to Dictionary.com, courage is the quality of mind or spirit that enables a person to face difficulty, danger, or pain without fear. I saw in Rodney a courage that was quiet and calm. He encountered great difficulty, but never feared it. Although ALS patients don’t experience physical pain, the emotional stress is a big issue, but not ever as expressed by Rodney. 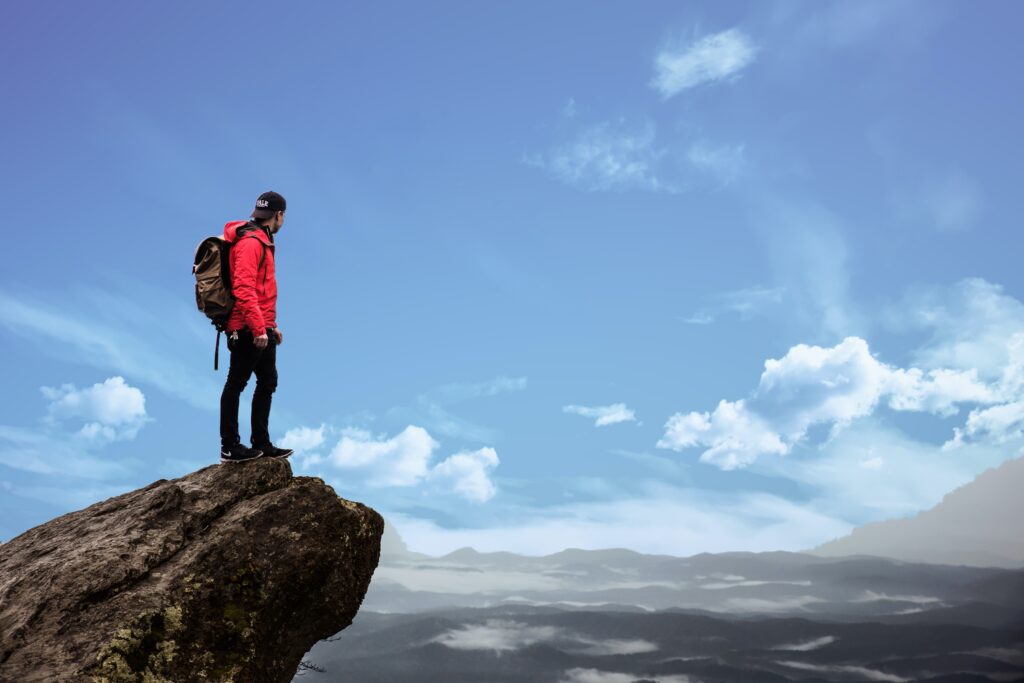 My father-in-law, ever so courageous and dignified (in a world that so needs it), lived at a place of surrender to God’s will, ever so grateful for the life he lived. He was an incredibly humble man, one who loved all who he encountered. I define these four things as the path to peace. While suffering from the disease that ultimately took his life, he did a wonderful job of exemplifying each.

Who are the courageous people in your life, not the ones who perform external heroic acts (which shouldn’t be minimized), but live lives with courage, dignity, and faith? I bet you have them. I assure you that you can learn from them.

Please send me your comments at [email protected].

It’s a simple fact: we cannot control life, no matter how much we try. None of us can.

Many of you might be thinking it isn’t true that you have no control. With a good plan and solid people around you, it’s possible to control things. Sure, much of life allows for you to have a certain amount of control, as long as you allow for contingencies, but even then, things don’t always go perfectly. The fact is that most of life is beyond your absolute control.

If you’ve been following my blogs or have read my book, you know that everything changed for me when I had my conversion, when I first experienced the unconditional love of God. Concurrently, I found that I had very little control over things in my life. I was so tightly wound, trying to control my company and everyone in it, my customers and my vendors, trying to keep track of my family and their needs, and in the end I just couldn’t maintain control.

God Knows Best for Us

What I’ve learned on my 13-year faith journey is that we have a God who loves us more than we can imagine, Who wants to see us happy, Who designed us for a specific purpose, uniquely and individually, Who knows best for us — the God who made us for greatness. I know this to be true for me and to be true for you.

So let’s consider these points objectively: 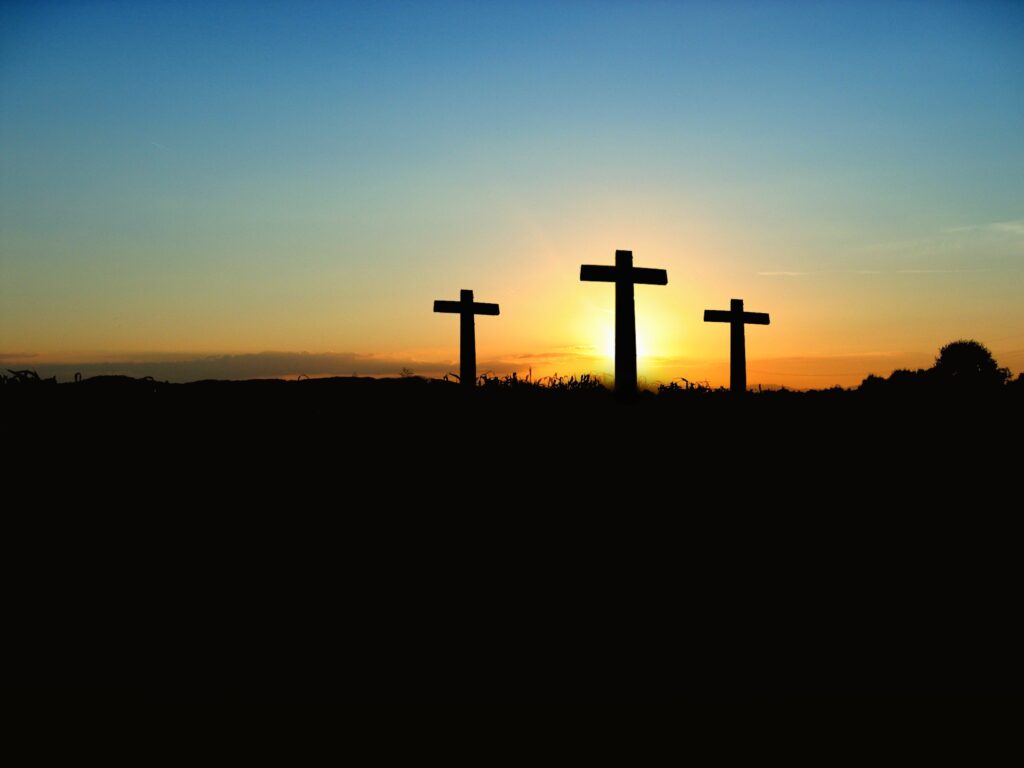 What Surrender Means to Most

If you’re like most, surrender probably isn’t a word that you’ve considered much, and for good reason. It’s generally thought of as in giving up or acquiescing, not having control. It certainly doesn’t imply strength or independence, the things we are taught that are so important.

Growing up playing sports, followed by starting my career in sales, I never thought of giving up, of surrendering. It was always about winning, either the game or the deal. And winning was about more than just winning. It was about what it said about me…my talents and strengths. Losing pointed to just the opposite…my faults, failings, and frustrations. 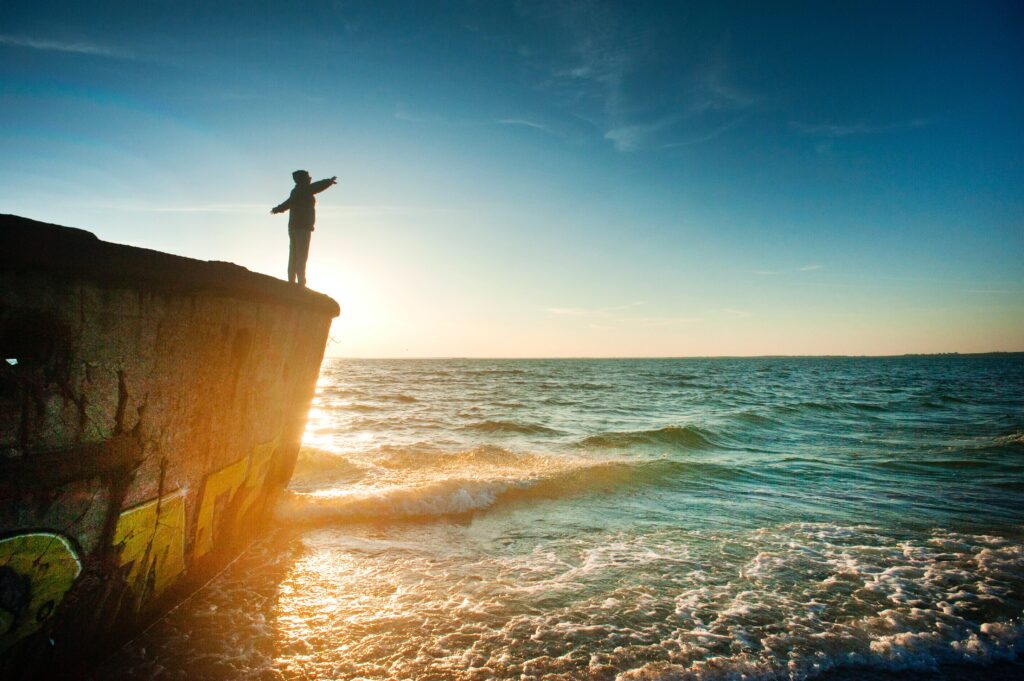 The Real Impact of Surrender

It’s a simple fact: surrendering to God’s Will relieves the pressure you feel and plays a critical role in you living a life of peace, joy, and fulfillment.

Instead of conceiving of something on your own, relying on yourself to get it done, and then facing the consequences alone, you can surrender to God’s Will, discerning what He wants for your life and particular situations, and relying on Him for whatever happens. You can use your unique and God-given gifts to do your very best, leaving everything up to Him and understanding that everything in life is part of His grand plan. As long as you know His love, it just doesn’t matter what others think.

God our Father loves us absolutely and handing it all over to Him brings incredible relief. In my case, surrender removed the pressure. It wasn’t just me alone that was responsible. I no longer had to own the outcome. Instead surrender leads to peace, joy, and fulfillment. All we can do is give every action our best, using our God-given talents, remaining open to His will, and leaving the outcome to Him. Try it…you won’t be disappointed.

We began this series the first Wednesday after New Years’, with accompanying videos every Friday. We identified the things that overwhelm us (chasing the things that can’t bring us happiness), then discussed my lived experience in how to overcome them. You’ve heard me say that in understanding and internalizing the unconditional love of Jesus Christ:

God loves you more than you’ll ever know, no matter what you’ve ever done…He made you for Greatness. You have unique and special God given gifts and we are put on this earth for a specific purpose. 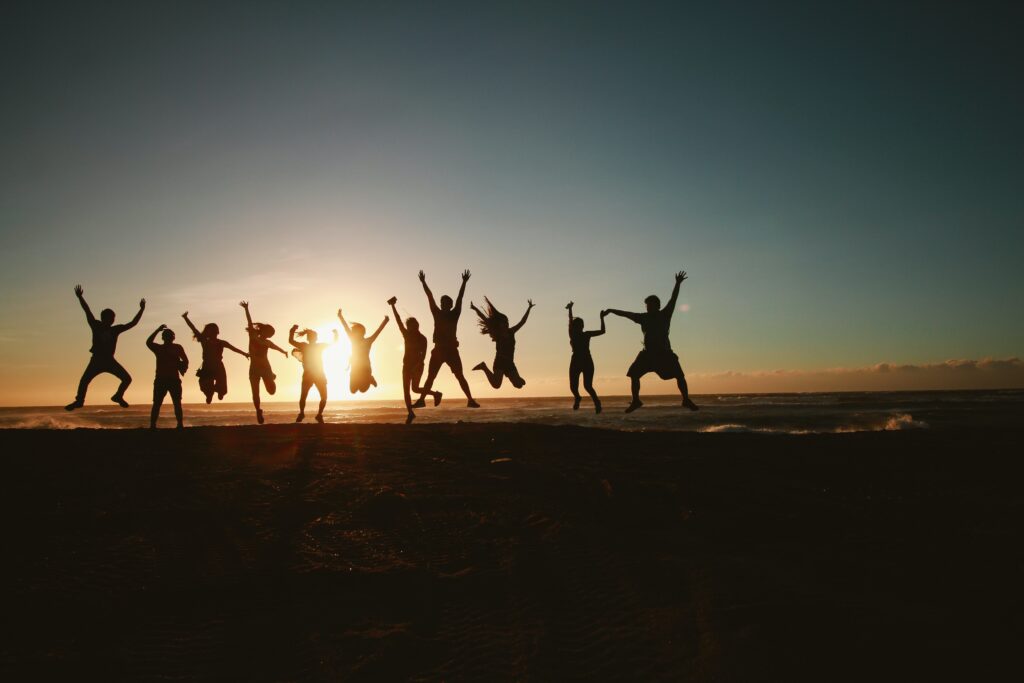 We’ve discussed the things that add to your greatness, your happiness…all the attributes of discipleship:

Embracing the above, although simple but not easy, is the only way to live a life of peace, joy, and fulfillment. The “peace” portion of that includes the following:

That’s it. Not overly complicated…definitely not easy. But oh, is it worth it though. It works, which doesn’t mean that all your problems are going to go away, but here’s the deal. In knowing the love of Christ, you’ll have a joy that is independent of substance and circumstance. You’ll be fulfilled. You’ll have peace.

Stay tuned for what we go to next. Shoot me a note with any requests. Reach out to me if you want to chat about any of this and as always, please email me with questions, concerns, comments, or prayer requests at [email protected].

Remember…God made you for Greatness!!!

P.S. Tomorrow marks what would have been my parents’ 60th wedding anniversary. Miss Dad, Mum. I love you!!!